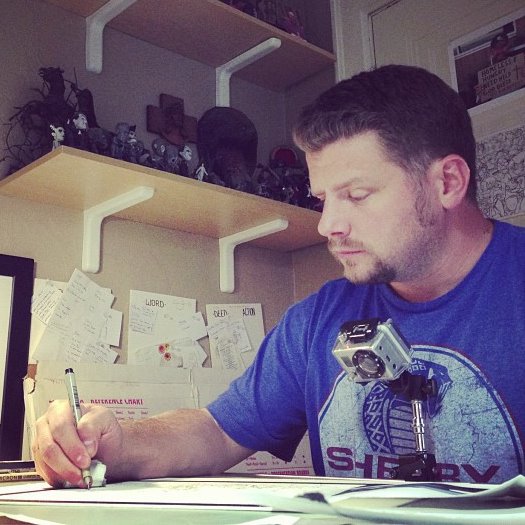 Woodrow J. Hinton III has been an award-winning illustrator since 1998. His work has encompassed everything from editorial and advertising, role-playing games and film concepting, to comic and graphic novel covers. He is best known for his horror and fantasy genre related work.

His goal is to create images that educate, interest, and sometimes inspire.
His work has been recognized annually by the Society for Professional Journalism. His fantasy and horror work can be seen in Spectrum 14, 15, and the upcoming 16. His client list includes: Revolver Magazine, Moonstone Comics, White Wolf, and Wizards of the Coast.

In addition Woodrow has been an adjunct professor at CCAD College Columbus of Art and Design and Art Academy of Cincinnati, for several years where he teaches Illustration; Hinton also guest lectures at other Universities and institutions on occasion.

Woodrow currently resides in Cincinnati with his beloved wife Lisa and their ferocious shih tzu-poo Rockwell.

“The Drowned Men: An Illustration Process.”